A fabulous night was had by all at Waterstones Ayr as we gathered on World Book Day to listen to Beatrice Colin read from her novel To Capture What We Cannot Keep.

Beatrice Colin reads from her novel

Beatrice enthralled us with an excerpt from the air balloon excursion over Paris where Cait Wallace first meets Emile Nouguier.  To set the mood we were treated to french fizz, a delicious sparkling Blanc de Blanc, supplied by Corney & Barrow, Ayr. In recognition of the Seafield connection Beatrice also read an excerpt where Cait had returned to Glasgow and was meeting with William Arrol.

“The city lay beneath a fug of smog and smur.  At William Arrol’s ironworks in Dalmarnock, the yard was full of steel girders on their way to the Queensferry workshop for the new Forth Bridge.  Arrol’s office was on the first floor above the erecting shop.  In his letter he’d asked if she could drop by sometime the following day to see him about a personal matter. Cait’s timing was unfortunate, his secretary told her.  Arrol had just been given the news that a twenty-year-old rigger had died in a fall from the Forth Bridge construction site.”

Corney and Barrow’s display for the book launch 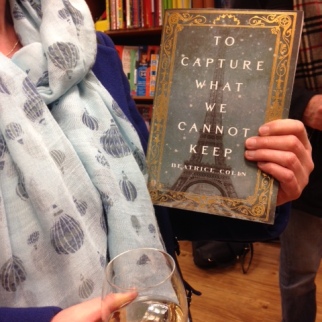 Afterwards Beatrice gave us an insight into her research for the novel and how she so perfectly managed to capture the atmosphere and spirit of the period.  The attitudes, clothes, city sites and engineering work are so well described that you are transported to  late nineteenth century Paris and Glasgow at the time of the Eiffel Tower and Forth Bridge constructions. But all too soon the evening came to an end and Beatrice followed in Arrol’s footsteps, catching the train from Ayr back to Glasgow, albeit without steam engine or horse-drawn carriage to meet her at the other end.