FoSH Committe members next to the Arrol riveting machine 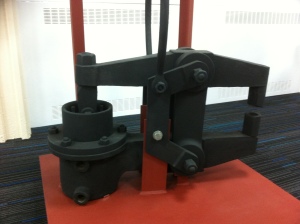 Close up of the Arrol Hydraulic Riveter

Friends of Seafield House committee members were delighted to attend the unveiling of a hydraulic riveting machine at the Institution of Civil Engineers (ICE) Museum Scotland on the evening of the 27th March, in celebration of the 125th anniversary of the Forth Bridge being opened.

The riveting machine was designed by William Arrol to be used on bridge construction sites to give strong, consistent riveted joints. The riveter was suspended from a crane and could be used in a vertical or horizontal position. Power to drive the riveter was from hydraulics using compressed water.  Riveters like this were used to  drive home many of the 6.5 million rivets used to construct the Forth Bridge. Read this ICE leaflet for more information about the riveting machine.