Despite the beautiful weather, members of the public abandoned the sunshine to visit South Ayrshire Council’s National Science and Engineering Week (NSEW) events at Rozelle House in Ayr at the weekend.

Friends of Seafield House (FoSH) were there with an exhibition on Sir William Arrol, the bridges he constructed and Seafield House, which became his home at the height of his building career and which FoSH are now campaigning to save. 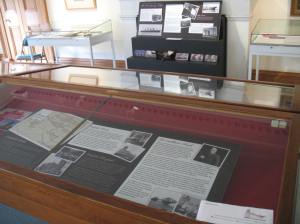 Display cases with photographs, books and  exhibition boards told the story of Sir William Arrol and his successes in engineering construction, including Tay Bridge, Forth Rail Bridge, Tower Bridge and the Arrol Gantry (used in construction of the Titanic).  Throughout the weekend a short film about the construction of the Forth Rail Bridge was being shown, “The River is Spanned” , courtesy of Harry Birrell, filmmaker, and Scottish Screen Archive.  The film was a prize winner at the Scottish Amateur Film Festival in 1950 and used original still photographs of the bridge being built, including 50’s special effects, to show the work involved at the different stages of spanning the River Forth.  There were also photographs of some of the bridges built by Sir William Arrol which, when seen through the Stereoscope viewer were revealed in their full 3D splendour.

Many thanks go to the Meccano Society of Scotland for their contribution, one of the highlights of the FoSH exhibition. Their meccano models brought life to examples of bridges built by Sir William Arrol: Tower Bridge built 1886-1894; and a transporter bridge similar to Arrol’s Middlesborough Transporter Bridge built 1910-1911. 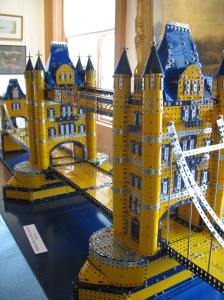 Model of Tower Bridge, built by Bobby Middlemas of the Meccano Society of Scotland

Model of Transporter Bridge, built by Alistair Nicoll of the Meccano Society of Scotland

The working models were fascinating to watch and demonstrated the engineering principles behind the bridges. With the expert assistance of Alistair Nicoll of the Meccano Society of Scotland, some budding engineers had a go at bridge building, helping to construct a meccano model of a bascule bridge similar to the bridge over the White Cart in Renfrew, which was completed by Sir William Arrol & Co Ltd in 1924.

Budding engineers building a meccano model of a bascule bridge

Download a copy of the FoSH Exhibition leaflet for National Science and Engineering week.

The theme of this year’s event is Steps to Discovery 2014: Bicycles, Bridges and Beyond and you can read details of the programme of events on the South Ayrshire Council website.  On the weekend of the 15/16 March the event programme will focus on Bicycles and on 22/23 March on Bridges.

Representatives of Friends of Seafield House will be present on Saturday 22nd March with further activities and information on Sir William Arrol and bridge building including:

If you are unable to join us at the weekend you can still see the accompanying exhibition focusing on Sir William Arrol and his bridge building, which has already opened at Rozelle House. Information will also available on FoSH and their campaign to save Seafield House in Ayr, which was Sir William Arrol’s home for many years.

Friends of Seafield House (FoSH) have had a great response to their request for messages of support in their call on NHS Ayrshire & Arran to consider not only best price in its decision on offers in the sale of Seafield House. Despite the short timescale we had a tremendous response and are very grateful to those who took the time to write.

The messages, have been forwarded to the Chair and members of the NHS Board and copied to members of the Viability Group before their meeting to make their recommendations on the sale of Seafield House.

Or read the messages of support online. Further messages will be added to the page as they are received.

We understand that we are close to the point at which NHS Ayrshire & Arran’s Viability Group will meet to discuss its recommendation on offers received in the sale of Seafield House. We further understand that offers were made. This is a great success given the many years that Seafield House lingered on the market under threat of demolition. The fact that a closing date was set on 11 December last year was a real step forward.

The restoration of Seafield House by way of enabling development is a viable option. With the support of SAVE Britain’s Heritage, FoSH has set out its view is that no offer should be discounted on price alone. FoSH has communicated this to NS Ayrshire & Arran and to members of its Viability Group.

Our grounds for best price not being the only factor are:

In making this case, we would appreciate you sending us a message of support to info@friends-of-seafield-house.org.uk that calls on NHS Ayrshire & Arran’s Viability Group to base its recommendation not only on achieving best price but taking account of the neglected state of the building, blanket TPO & provision for community buyout in the Community Empowerment & Renewal Bill that is before the Scottish Parliament. We will collate all messages and send them to NHS Ayrshire & Arran’s Chairman & Chief Executive & to its Viability Group. In addition, we will post messages on a dedicated page on our website, Facebook & add into our Twitter feed.

Many thanks for your support at this critical time in the campaign to SAVE Seafield House.